I had an opportunity to go to Jackson Hole, WY this week.  Jackson Hole is known for the Teton National Park and its skiing. Of the three times I have been there, I have not skied. But there is something else it is known for and that is the popular Mormon Row barns. They are located in such a place that the backdrop is awe-inspiring. The Tetons tower over the old barns on a clear day. Even though I have never seen the Tetons AND the barns at the same time, I have seen some fantastic shots by other photographers. 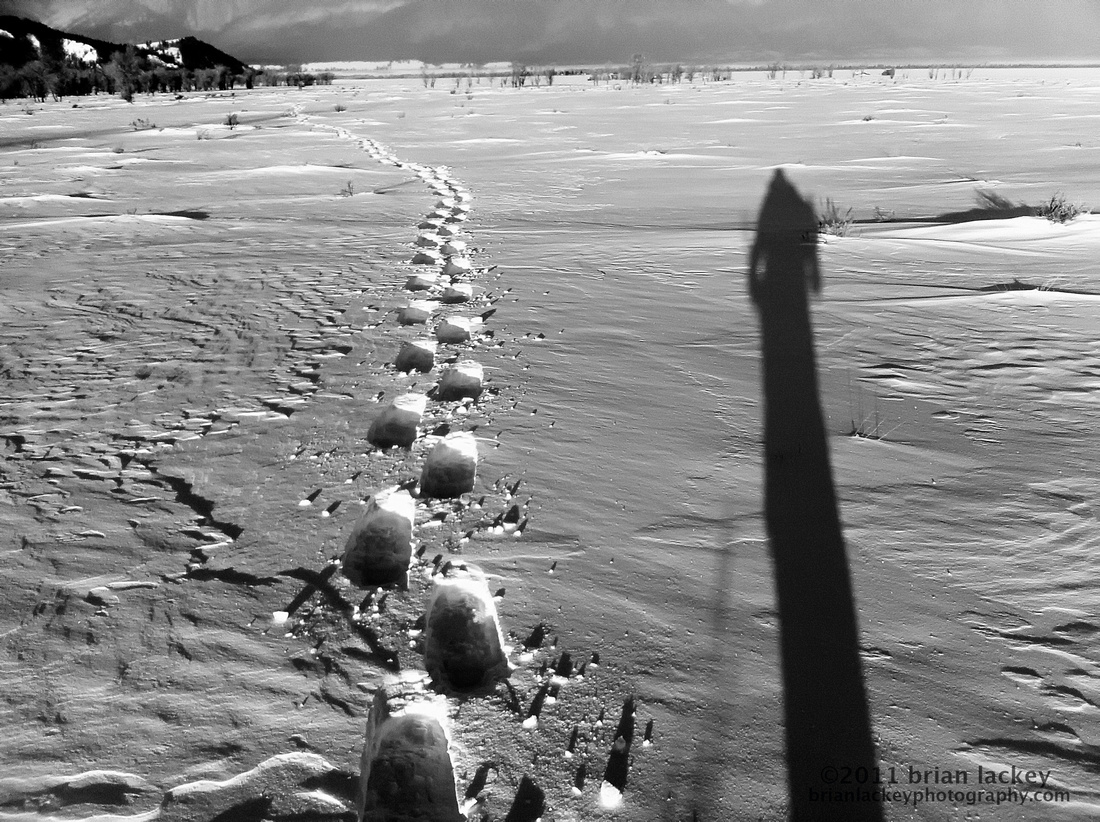 Yesterday, I woke up at 5:15 and headed out to Mormon Row in hopes of capturing the venerated barns just before sunrise with the Grand Tetons behind them.  After all, the weather called out for just a few clouds in the morning and plenty of sun. I got to Kelly, which is a little town just south of Mormon Row, when I started hitting major snow drifting on the road.  Mind you, this is my third attempt at shooting the barns at sunrise. The last time, I got to the road that led to the barns but I needed snow shoes to hike in the half mile it took to get there. I decided to drive through the drifts hoping it was only a few drifts.  Several hundred yards up the road my car started to high centering on them.  First chance I got to turn around, I did. As I headed back to Jackson with my disappointment for the third time, I passed a snow plow that was headed for Mormon Row so I followed it.  The wind was blowing and the temperature was a nice -7 with a windchill of -20 deg farenheit. 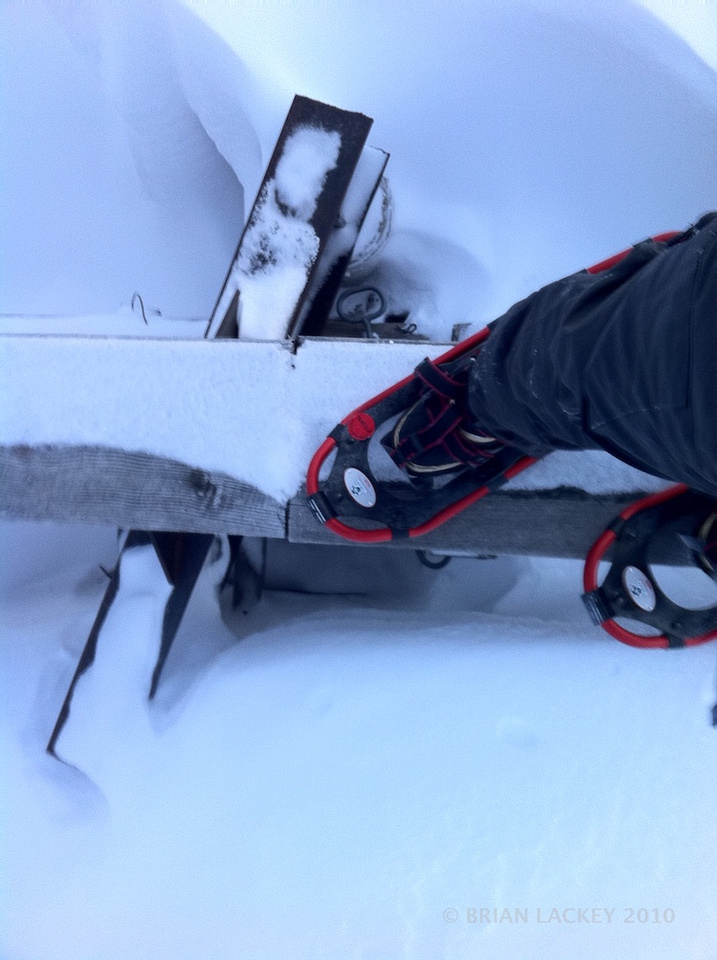 I came up to a ditch with a pipe support crossing it.  This was the only way across without going back to the road to cross. By this time, my Sorrels were starting to fail keeping my feet warm.  My toes felt like ice cubes.  The wind was beating the backs of my legs and the snow pants were not keeping all the cold and wind out.

It was now 7:25 and the sunrise was at 7:30 so I had 5 minutes to get to my location. I tried to pick up the pace but cutting your own trail is difficult to say the least.  Seemed every ten steps I would step in a hole and had to pull myself back up.  I could finally see the first barn ahead and was scouting out where to setup my tripod.  I was not in a great location and it was either get what I could of the magic hour that was left or fail all together.  I stopped and setup up my tripod at rattled off a few shots. Previously, to be ready for this morning, I had put my 17-40 lens on thinking the wide angle landscape shot was the ticket.  Since I lost time in getting to my parking spot and also starting my trek in the wrong spot I had set myself back a good half hour. Seeing that I was still too far way to use the 17-40 lens, I had to switch to my 70-200 lens.  With the wind blowing and the windchill at -20, going gloveless was something I had to do quickly. Not to mention the cold on my eyes was taking a toll on my face. I changed lenses and started recomposing my shots. 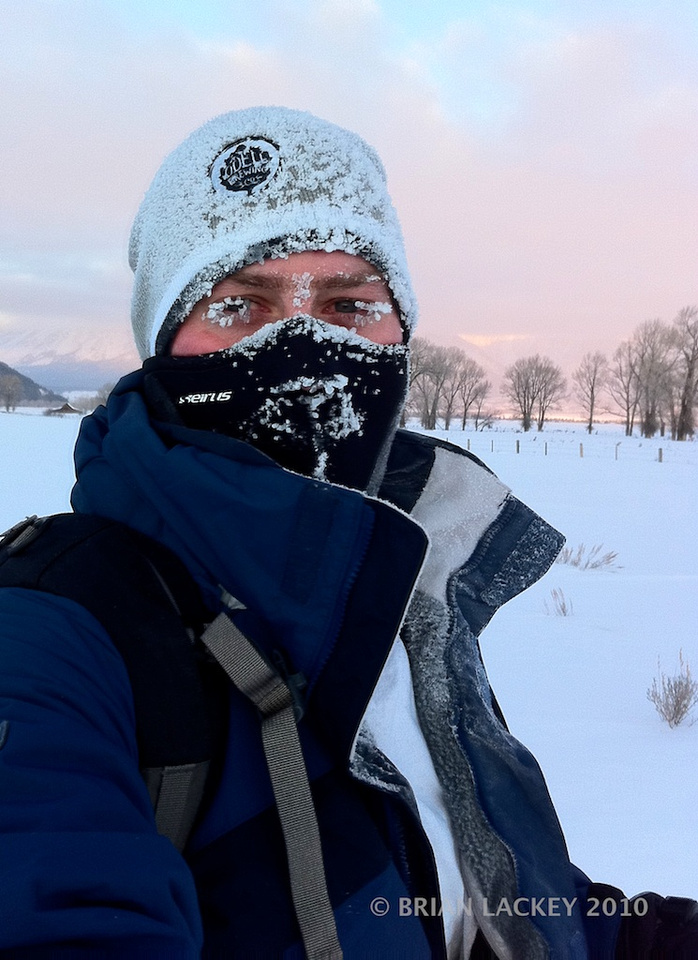 By now my toes are numb and my eye lashes are coated with ice. I decided to start wrapping it up and head back to the car and call it a day. I was tired and my legs were turning to jelly.  I had a straight shot to the road and it seemed quite close.  This portion of the field seemed to have snow holes every three steps which made it very frustrating for me and my tired legs.  I fell forward so many times that at one point I just laid there to rest. I bent one of my poles trying to get back up.

I passed up a great shot of a lonely tree only because I was worried about frost bitten toes as I could not feel them anymore.  I just wanted to get back to the main road and in a warm car.  Once I made it to the road I thought I was home. I started walking south and when I got to where I thought my car was, I realized it was quite a bit farther.  I walked over a quarter mile with snowshoes in hand.  My feet did warm up finally and I was feeling better about my situation.

While walking down the road, I turned around and saw the clouds open up and three of the tall peaks were glaring down at me. Again, I was to tired and cold to stop and setup for a shot. 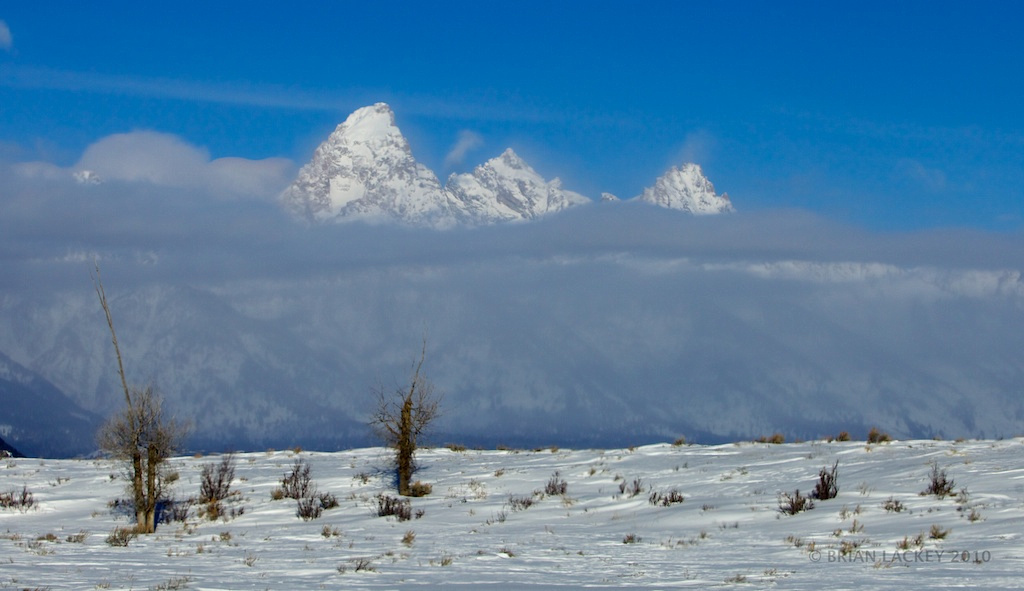 I made it to my car finally.  I got warmed up and prepared to take a few shots from my car window.  The problem was that the metal lens and camera body were so cold that I could not hold it for more than about ten seconds without freezing my hands.

Well, for the third time, I did not get the shot I wanted.  Maybe there will be a fourth time.